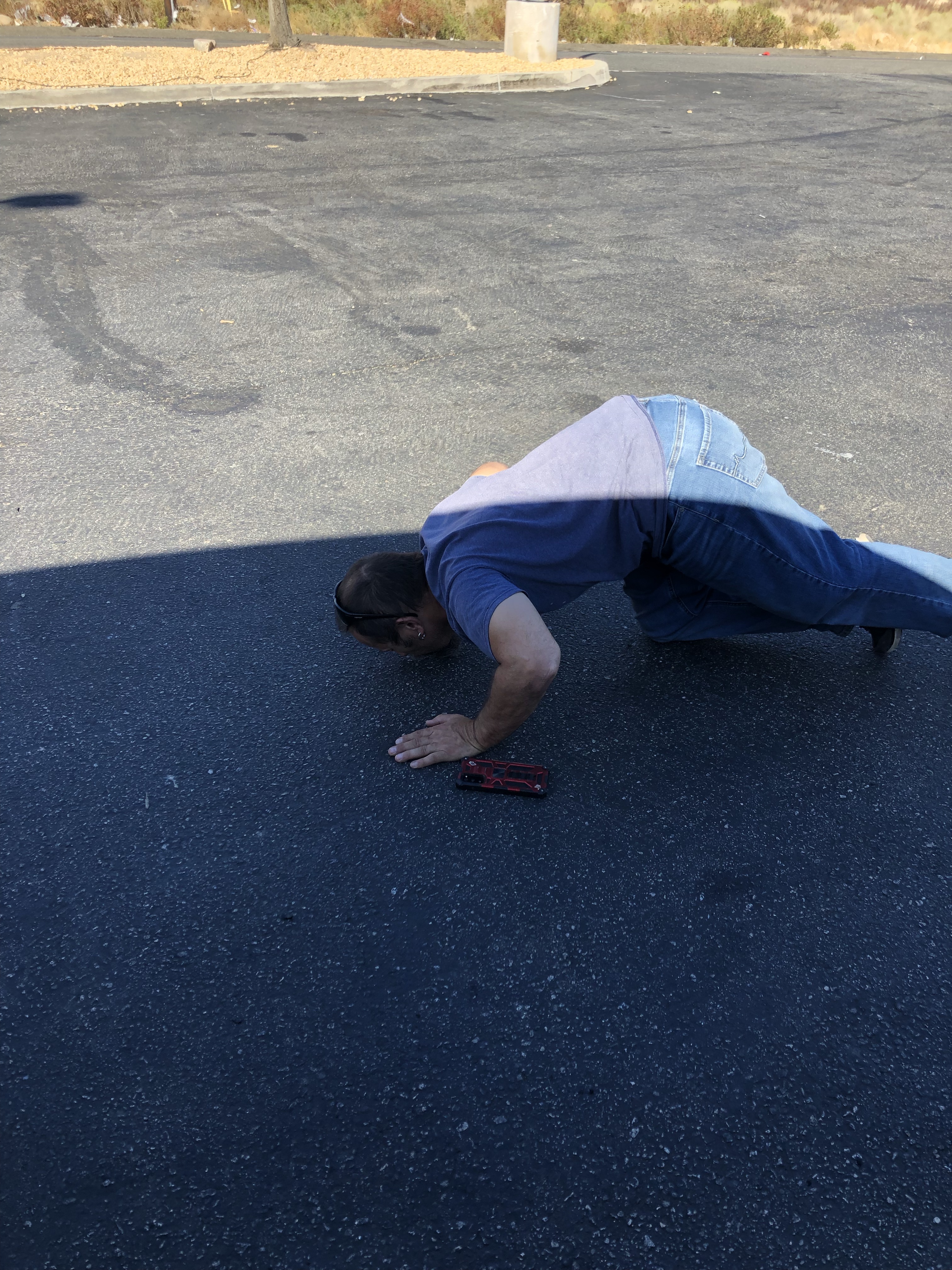 Oof! It has been a moment since I last posted. I’ve missed posting a BUNCH of things, but if you follow my IG, @osnailtrail, you’re probably still pretty up to date on the O’Neill life these days.

We left Washington in September and made our way down to California. We had never intended on going to California for a contract. We had thought maybe we’d drive through parts of it just so we could say we had seen it. I wanted to drive along the scenic Highway 1 by the coast, however after chatting with some new PNW friends, I was nervous about taking the trailer on it.

I was offered a contract in Pomona, CA for 8 weeks and we thought “what the hell…let’s give CA a try.” The trek down to CA proved to be our most challenging excursion yet. Here’s what happened along the way…..

We had four days to drive from Seattle, WA to Pomona, CA, but we wanted to make it in three in order to explore where I would be working and what the area was like. We made great time the first day, but it was tiring. We were lucky enough to be able to “camp” at a Camping World where we had power hookups. The second day, we decided to spend the night at a rest stop. We had our generator, clean bathrooms, and food near by. Sleeping was hard because it was very noisy with the trucks coming in and out all night. So once morning came, Peter and I were tired, hungry, and cranky. And THEN we couldn’t get our slide outs back in. Our generator had decided it didn’t want to work. And our alleged brand new battery ALSO died. Yes yes…there are ways to manually bring in the slide outs…but we weren’t sure how to do that yet! It’s one of those things you keep promising you’ll learn about and then it falls by the wayside of all of the other things you need to do. So here we were, stuck at a truck stop without power and the day is quickly getting away from us. We needed to drive 6 hours to get to our destination. And then….we find a bulge in my right driver’s side tire. Dear Universe…what else?

After some exclamations and angry words, the hubs and I put our heads together. We trekked into town with the kiddos. We found a little garage to get a new tire, we found a shop nearby that had a good battery, and incidentally we found a great little taco restaurant for brunch. Our bellies full and our hopes high, we turned back to the rest stop, where luckily we hadn’t gotten a ticket for keeping a spot too long. We hooked up the new battery and had JUST ENOUGH power to get those slide outs in. At this point, we are half way through the day and we are just not sure we are going to make it to our spot for the night. We were so close to our destination, but with light fading, setting down camp is difficult in a new place. So we chose to stay in a hotel for the evening. It was lovely to have a hot shower, a pool to dip in for a little while, and room to spread out. 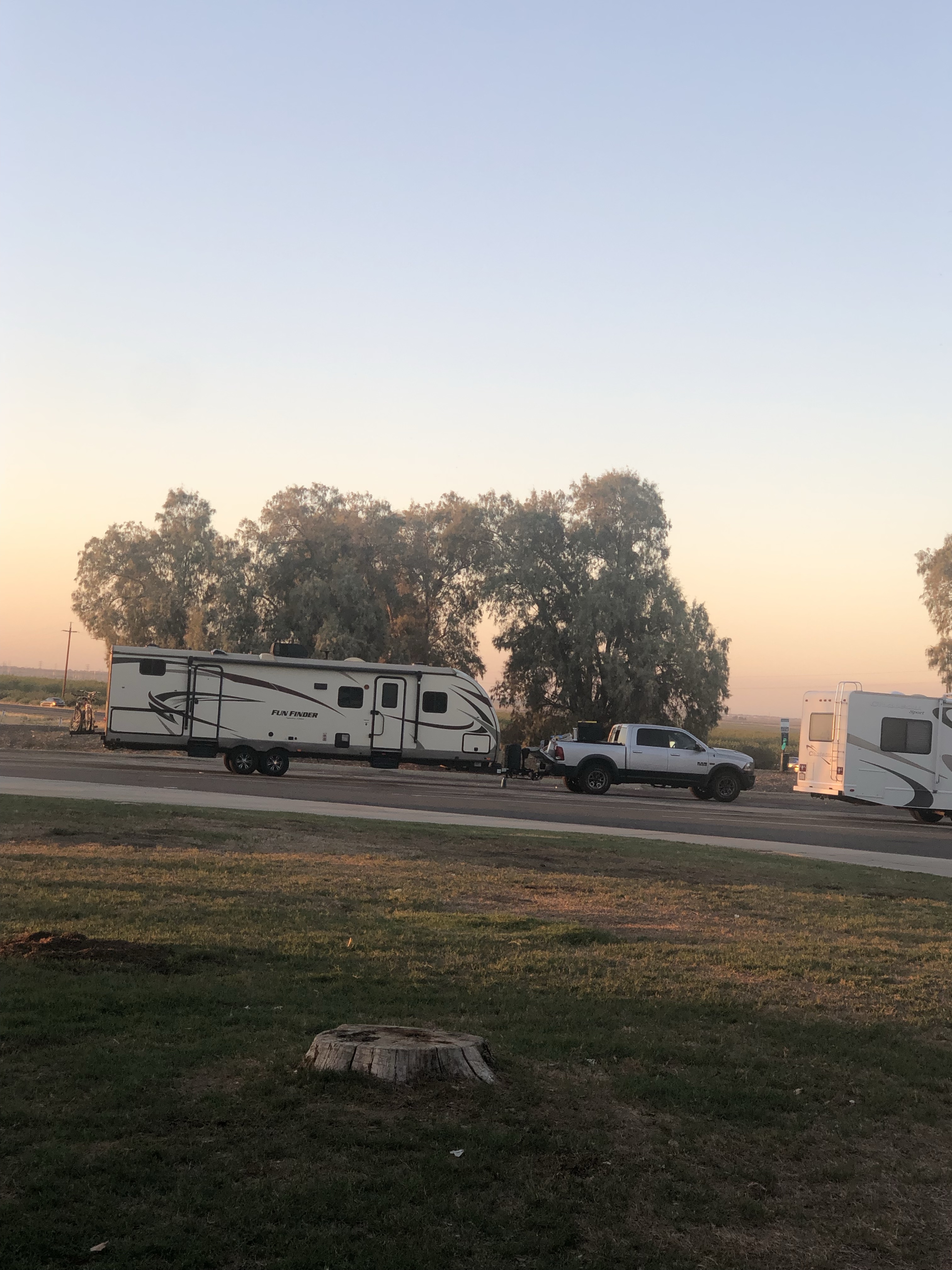 When we woke, we were excited because we were just about to our destination. We had once again used Hipcamp, and had a spot in Wrightwood. The ad stated that it was high up and you could see the lights of the city for miles. It boasted peace and quiet and it looked like it had tons of running room for the kids. The owner sent us a video of how to navigate to get to the spot…which should have sent off warning bells honestly. The road seemed a bit tight, but again the owner assured us that 45′ rigs and big Duallys had come through with no problem. Peter and I discussed driving the road in my car to see what it was like, but ultimately, it was said that we should just “go for it” since we had seen the video.

Listen….if your instinct is telling you to check things out first…I implore you to listen to your inner self. It knows more than you do, I promise.

I led the way with the children and cats and Peter followed closely behind with the trailer in tow. As we started to climb the mountain, I realized I could not simultaneously watch the video for directions AND navigate the very narrow “road”. I frequently had to stop and get out to look ahead and see where I was going. Even now as I type this, 2 months later, I’m getting butterflies in my stomach and feeling nauseous. At some point, I must have taken a wrong turn. The “road” was not well marked and there were several places that you had to choose.

Yea…that was me. I must have taken the road less traveled because suddenly we found ourselves in a situation that I’m still not quite sure how we got out of alive. As I drove onto the pad of land, I saw a steep drop off to my left, a long, narrow and VERY steep road to my right, and a small road that ended in some trees directly in front of me. I had literally reached the end of the line. For about 10 minutes I had absolutely no idea what to do. Neither did Pete. I thought for sure this was it…our adventure was over. We either fall of this mountain side, or we unhitch and leave our trailer behind, a big loss to be sure. I called a tow company, certain they had to have helped someone out in this situation before. Of COURSE that was a silly idea. How were they going to get the rig out if we couldn’t figure it out?? We discussed our options. We went back and forth a LOT. I literally got down on my knees…and I’m not a big “down on my knees praying” type.

At some point, a strange mangey mutt with only one eye came trotting up to me, his apparent owner not far behind. I’m not sure when they arrived because there wasn’t a soul around for the entire 15 minutes before this. The owner seemed curious about our arrival and didn’t have a lot of good advice about getting down off this mountain, but she sure was encouraging. Peter and I had decided that the only way we could do this is if he tried to completely turn the rig around. It was an absurd idea, but the only one we had. I did the best I could to direct him, and there were a few moments where I genuinely thought the trailer was going to take him right down the side of that steep mountain. But with one-eyed-dog looking on, and encouraging-trailer-lady shouting her support, Peter got the entire rig turned around with only minor damage to the rig, the truck, and a stupid little stumpy tree that was directly in the center of this pad of land.

Here’s the really funny part…we’re finally free to drive down the mountain. And I jump in my car…and I CAN’T pull away. My car literally won’t drive back up the way I came down. So, Encouraging-trailer-lady and Peter get behind the car to push it out of what we thought was soft dirt I had gotten stuck in. I was able to get out of the dirt….only to realize…I had put my parking brake on so that the car would stay put on the decline. <facepalm> Boy did I feel like a dolt.

Finally, able to s-l-o-w-l-y make our way down the mountain, we drove another mile or so to the nearest gas station and peter got out of the car and quite literally kissed the ground.

We took a breather and got some lunch and searched and searched until we found Prado Regional park, where we landed for 3 weeks of our time. 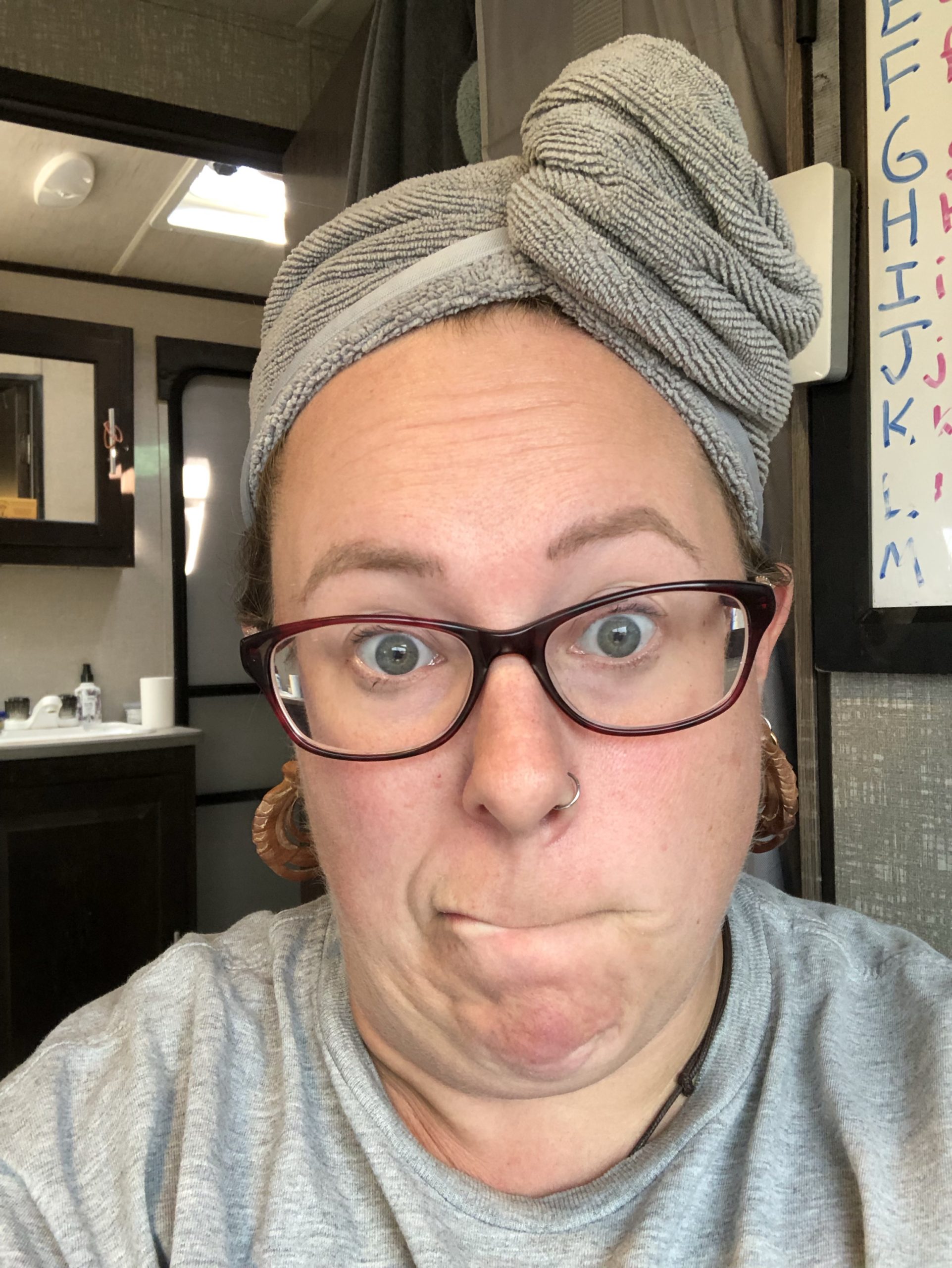 Self Care While Full-Time RVers

When I took my first contract at the University of Chicago, it was right before the pandemic shut everything down.... 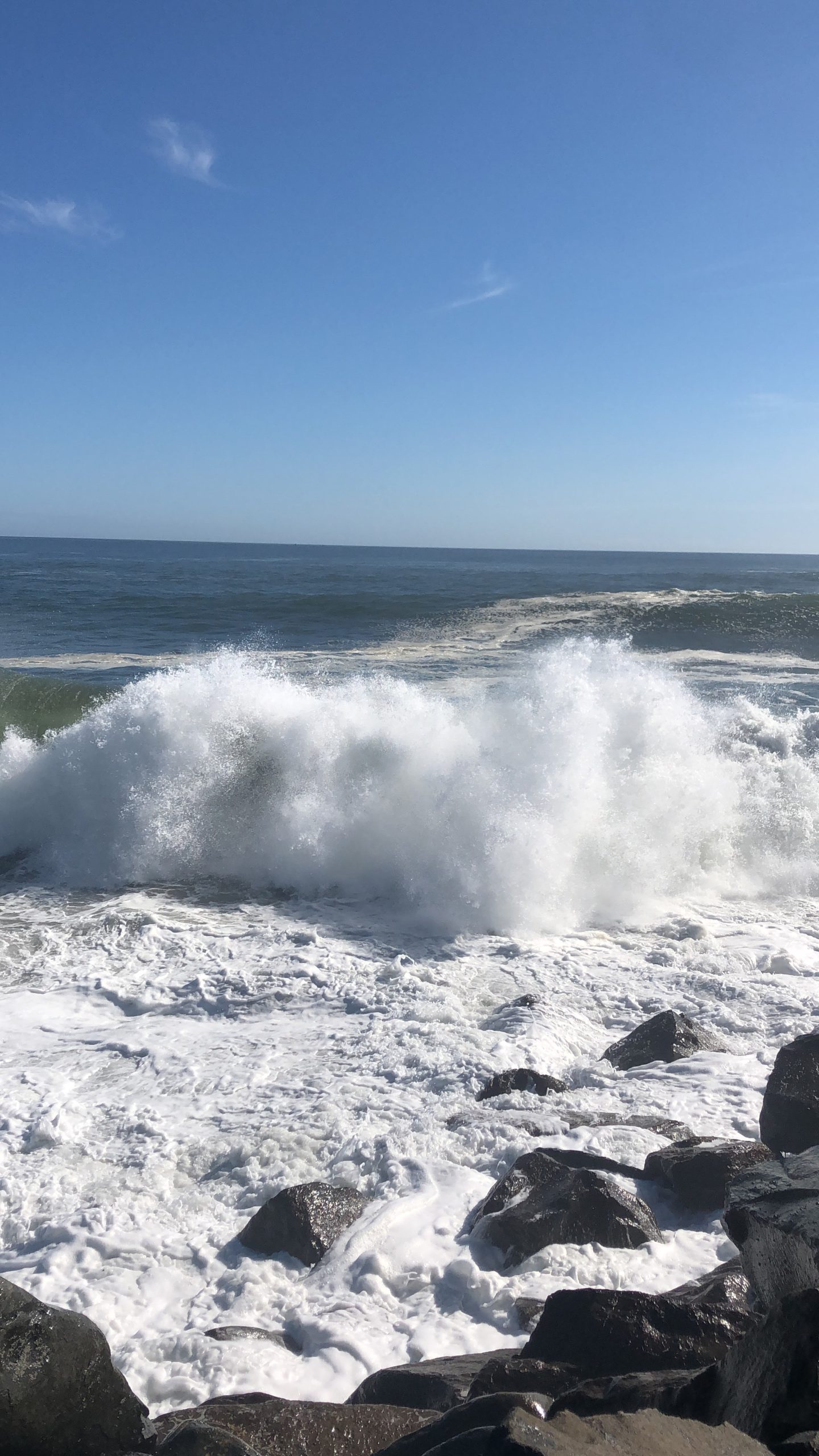 When I was a kid, I had this fantasy about the ocean. I had never seen it except in the movies or in my mind's eye...